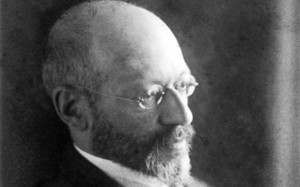 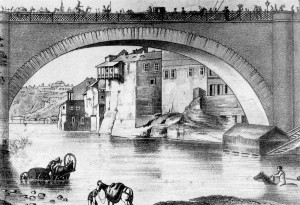 The image of external things possesses for us the ambiguous dimension that in external nature everything can be considered to be connected, but also as separated. The uninterrupted transformations of materials as well as energies bring everything into relationship with everything else and make one cosmos out of all the individual elements.

The finitude into which we have entered somehow always borders somewhere on the infinitude of physical or metaphysical being. Thus the door becomes the image of the boundary point at which human beings actually always stand or can stand. The finite unity, to which we have connected a part of infinite space designated for us, reconnects it to this latter; in the unity, the bounded and the boundary less adjoint one another, not in the dead geometric form of a mere separating wall, but rather as the possibility of a permanent interchange—in contrast to the bridge which connects the finite with the finite. Instead, the bridge removes us from this firmness in the act of walking on it and, before we have become inured to it through daily habit, it must have provided the wonderful feeling of floating for a moment between heaven and earth. Whereas the bridge, as the line stretched between two points, prescribes unconditional security and direction, life flows forth out of the door from the limitation of isolated separate existence into the limitlessness of all possible directions.
If the factors of separateness and connectedness meet in the bridge in such a way that the former appears more as the concern of nature and the latter more the concern of humankind, then in the case of the door, both are concentrated more uniformly in human achievement as human achievement. This is the basis for the richer and livelier significance of the door compared to the bridge, which is also revealed in the fact that it makes no difference in meaning in which direction one crosses a bridge, whereas the door displays a complete difference of intention between entering and exiting.

This completely distinguishes it from the significance of the window which, as a connection of inner space with the external world, is otherwise related to the door. Yet the teleological emotion with respect to the window is directed almost exclusively from inside to outside: it is there for looking out, not for looking in. It creates the connection between the inner and the outer chronically and continually, as it were, by virtue of its transparency; but the one-sided direction in which this connection runs, just like the limitation upon it to be a path merely for the eye, gives to the window only a part of the deeper and more fundamental significance of the door. Of course, the particular situation can also emphasize one direction of the latter’s function more than the other. When the masonry openings in Gothic or Romanesque cathedrals gradually taper down to the actual door and one reaches it between rows of semi-columns and figures that approach each other more and more closely, then the significance of these doors is obviously meant to be that of a leading into but not a leading out of somewhere—the latter existing rather as an unfortunately unavoidable accidental property. This structure leads the person entering with certainty and with a gentle, natural compulsion on the right way. (This meaning is extended, as I mention for the sake of analogy here, by the rows of columns between the door and high altar. By perspectivlly moving closer together, they point the way, lead us onwards, permit no wavering—which would not be the case if we actually observed the real parallelism of the pillar; for then the end point would display no difference from that of the beginning, there would be no marking to indicate that we must start at the one point and end up at the other. Yet no matter how wonderfully perspective is used here for the inner orientation of the church, it ultimately also lends itself to the opposite effect and allows the row of pillars to direct us to the door with the same narrowing from altar to door as the one that leads us to its main point.) Only that external conical form of the door makes entering in contrast to exiting its completely unambiguous meaning. But this is in fact a totally unique situation which it symbolizes, namely, that the movement of life, which goes equally from inside to outside and from outside to inside, terminates at the church and is replaced by the only direction which is necessary. Life on the earthly plane, however, as at every moment it throws a bridge between the unconnectedness of things, likewise stands in every moment inside or outside the door through which it will lead from its separate existence into the world, or from the world into its separate existence.The forms that dominate the dynamics of our lives are thus transferred by bridge and door into the fixed permanence of visible creation. They do not support the merely functional and teleological aspect of our movements as tools; rather, in their form it solidifies, as it were, into immediately convincing plasticity. Viewed in terms of the opposing emphases that prevail in their impression, the bridge indicates how humankind unifies the separateness of merely natural being, and the door how it separates the uniform, continuous unity of natural being. The basis for their distinctive value for the visual arts lies in the general aesthetic significance which they gain through this visualization of something metaphysical, this stabilization of something merely functional. Even though one might also attribute the frequency with which painting employs both to the artistic value of their mere form, there does indeed still exist here that mysterious coincidence with which the purely artistic significance and perfection of an object at the same time always reveals the most exhaustive expression of an actually non-visible spiritual or metaphysical meaning. The purely artistic interest in, say, the human face, only concerned with form and colour, is satisfied in the highest degree when its representation includes the ultimate in inspiration and intellectual characterization. Because the human being is the connecting creature who must always separate and cannot connect without separating—that is why we must first conceive intellectually of the merely indifferent existence of two river banks as something separated in order to connect them by means of a bridge. And the human being is likewise the bordering creature who has no border. The enclosure of his or her domestic being by the door means, to be sure, that they have separated out a piece from the uninterrupted unity of natural being. But just as the formless limitation takes on a shape, its limitedness finds its significance and dignity only in that which the mobility of the door illustrates: in the possibility at any moment of stepping out of this limitation into freedom.