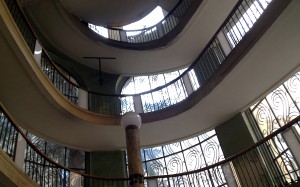 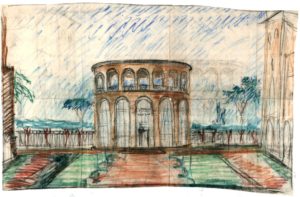 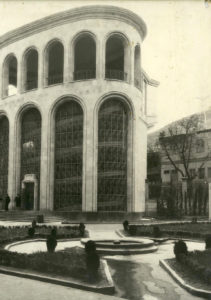 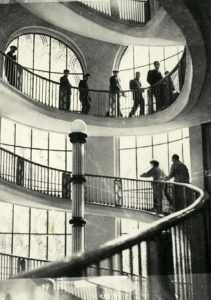 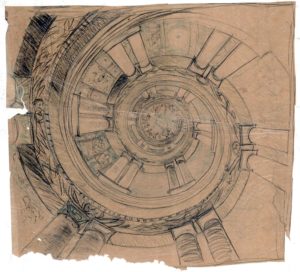 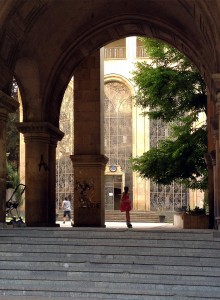 The view from Rustaveli avenue 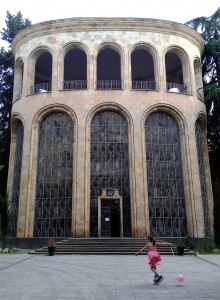 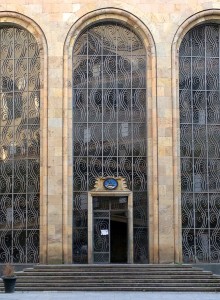 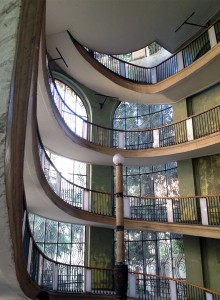 The Academy of Sciences building at the top of Rustaveli Avenue, designed by Konstantine Chkheidze and Mikheil Chkhikvadze (completed 1953-1958), is a typical example of post-war Soviet monumental architecture. The recent (and unfortunate) removal of the red star atop the 55 metre high tower makes little difference to its distinctive totalitarian character.

The nearby lower Station of the Mtatsminda cableway (Project by Konstantine Chkheidze, 1958-1960) is set in the Academy’s backyard and is part of the building complex.

The architect makes this freestanding oval symmetric tower look remarkably light by the incorporation of a series of large glazed arches crowned by a small-scale open gallery. The internal ramp wraps delightfully round the oval shape providing a sense of space and airiness. The outer walls, made from orange and ochre Bolnisi tuffa-stone, remove all heaviness from the overall construction. The symmetry of the interior is finished off by providing the windows with a finely patterned metalwork, letting light and air into the climbing space up to cable-car.

It’s hard not to make a comparison with Frank Lloyd Wright’s Guggenheim Museum built at the same time (1959) in New York. While the two buildings serve different functions there is an unmistakable symbiosis of style found between capitalist America and the then soviet Georgia.

This unique building has become iconic for generations of Tbilisi citizens even though the cable car hasn’t worked for over twenty years. Whether the cableway will be re-established or not, this wonderful building must be saved in its original form, not only as a unique example of Georgian design, but also as a small gem within the canon of world architecture.