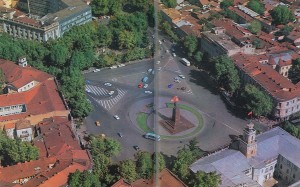 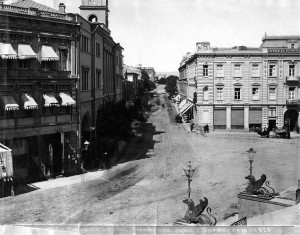 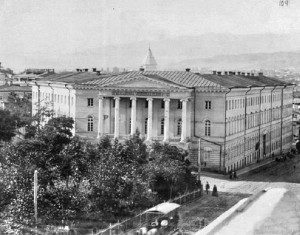 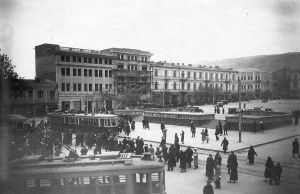 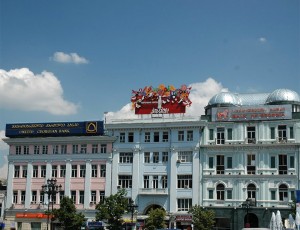 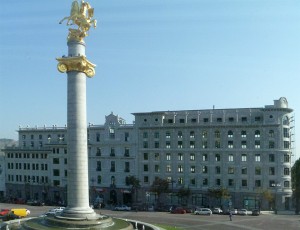 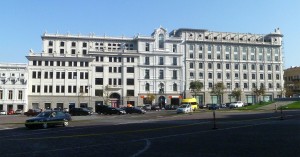 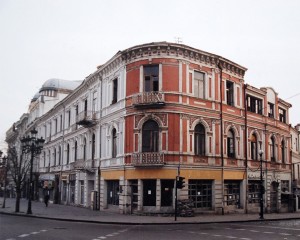 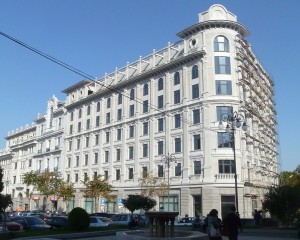 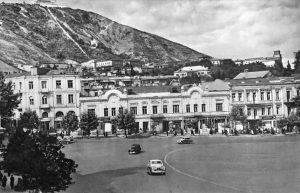 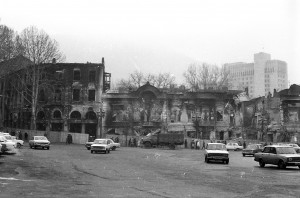 The modern-era development of Tbilisi’s main square began in the early 19th century. Located outside the wall of the old town (Kala) and cut by Sololaki mountain ravine, the area was originally called Garetubani. Although the history of its creation is fragmentary and the square destroyed many times, its trapezoid shape remains in tact, and until very recently, the sizes of its facing buildings.

Its first structure in russian neo-classical style was the Transcaucasian military headquarters (1824-1829). It stood at the north-eastern corner of today’s square.The next year (1825) the Swiss architect Giuseppe Bernadazzi constructed a large neo-classical house for Iakob Zubalashvili. This subsequently became the famous Theologcal Seminary (which educated Stalin and many of the Georgian Mensheviks), thence to transform (1953) into the Art Museum.

Both buildings remain today, but those between them were replaced in the Soviet period. 1 Rustaveli Ave., stands with a side facade facing the square (architects s.Kubaneishvili,  A.Kurdiani and  M.Melia, 1939) and the “Tsekavshiri” building, (architects G. Melkadze and N. Kvartskhava, 1971), is currently demolished.

In 1851 a Grand Theatre build by the architect, Giovanni Scudieri opened triumphantly in the square’s centre. Inspired by Renaissance architecture, with interior paintings by Gagarin, it also included a caravanserai belonging to the famous merchant and patron Gabriel Tamamshev. The theatre burned down in 1874 and was never restored. In 1934 caravanserai was lost due to a Soviet re-design of the square.

Freedom Square’s entire south side is dominated by Tbilisi City Hall whose symmetrical facade and central clock tower was intended as the square’s central axis. It also determined the scale of the surrounding buildings. Built originally by the engineer A. Ozerov in the 1840s as the city’s police station, at the end of 1870s, the German architect Paul Stern won a competition to change the facade into pseudo-moorish style. After this in 1879 the city’s Advisory Board was established there. In 1910-1912 the building received more alterations but they remained faithful to the original style. Recently the building has been housing Tbilisi city Hall, but its 2012 renovation managed to replace the authentic facade plasterwork.

The buildings on the west side of the square were destroyed during the 1991-1992 Tbilisi civil war. One was the Hotel “Kavkaz” built in 1876 by the architect Alekseev, another the former Hotel “International” located at the corner of Leonidze Street. The buildings in between were all two-story. In 2002 all these were replaced by the 9 story-high Marriot Courtyard Hotel, designed by architect V.Zinzadze.

As for the square’s eastern side, until the 1850s it contained the old city wall, but this was removed and in 1880 the Sololaki ravine (Avanaantxevi) was filled in allowing the square to be unified and paved. In 1885 the north-eastern side was named “Novi-sad” (“New garden”, where the current, smaller Pushkin Square is located). This area received its Pushkin monument in 1892, and Pushkin street was then further developed.

Originally Pushkin 1-3 contained Tbilisi’s first Credit Society (later to become the Bank of Georgia), built in 1870 in three stories by the architect A. Salzman. In the same section of the Square was the 1902 “Tifliski pasaj” building, designed by the architect Shimkevich (it had an extra story added by the architect Neprinzev in 1935). In 1903 Saltzman’s building was extended all the way to the corner of Leselidze Street. Unfortunately this section was completely and unnecessarily destroyed in 2003 then left as an empty space for several years.

Although promises were made for a faithful reconstruction of the original, in 2012 a new construction finally appeared – of seven floors. This completely changed the scale of the square and dwarfed the Town Hall. The new construction designed by L. Mushkudiani and G. Kiknadze stands as a concoction of different architectural styles, from a variety of centuries.

In 2012 also, reconstruction further down Pushkin street unearthed fragments of the old city wall. After excavation plans were changed. Pushkin street was closed to down-flowing traffic, a pedestrian precinct created and the old walls left exposed to the elements, on public display.

A further change in scale of the square was made in 2009 when the 19th century building on its south eastern corner (at the cross of Leonidze and Dadiani streets) and the building on the corner of Galaktioni and Leonidze street, were demolished in spite of loud protests, both locally and internationally. They were rebuilt as a ‘sham replicas’ of themselves, with an extra floor.

The central open space of the Square has also undergone profound changes, first with the destruction of the theatre, then the 1934 demolition of the caravanserai. In its place a marble tribune was built only to be demolished in 1950 and replaced six years later by the Lenin statue (sculptors S. Kavlashvili, with participation of U. Japaridze, architects G.Mikeladze, K.Chkheidze, K. Xechinashvili). In 1990 the Lenin monument was removed along with communism from Georgia. First the area lay empty as a patch of green grass, then a rose bed, then a fountain was built. After the Rose Revolution of 2003 it received the current huge column topped by the golden statue of St.George designed by the sculptor Z. Tsereteli.

It is fair to say that today’s Freedom Square stands as one of the most altered capital-city main squares in Europe. During the last 20 years the height of its buildings have trippled and its former principal structure – the City Hall – correspondingly shrunk in importance. As yet it remains unknown what will replace the existing “Tsekavshiri” development on the north-west side. However the entire accent of the square is new, embodying an extremely diverse architectural variety – thus consigning its former, friendly, low-lying character to history.

[…] area around the Freedom Square (or Liberty Square) is where Tbilisi’s new town started to develop in the 19th century. The […]