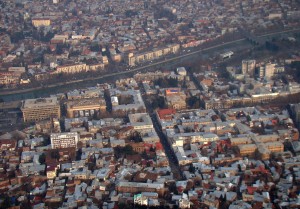 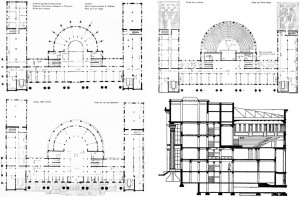 Floor plans and section by A.Shchusev 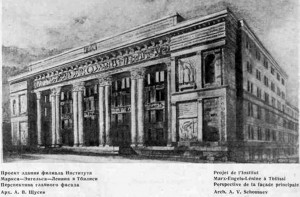 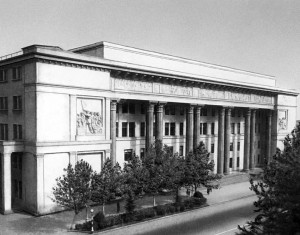 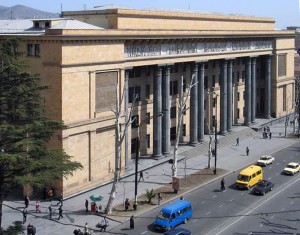 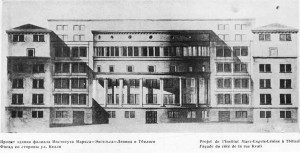 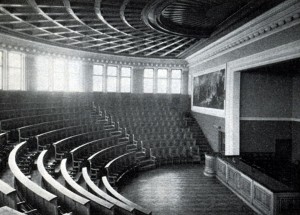 Conference hall in the original state 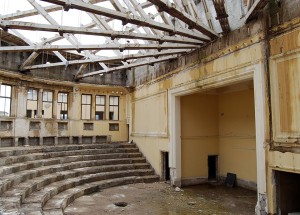 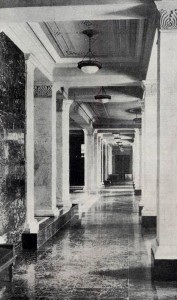 Hallway in the original state 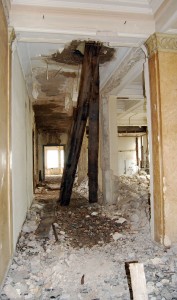 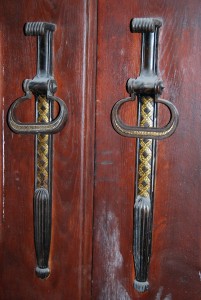 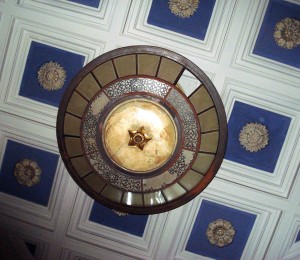 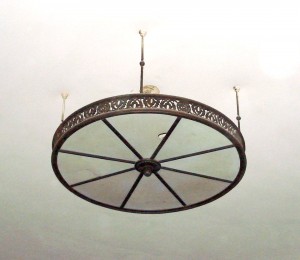 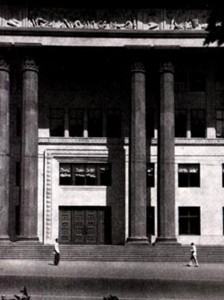 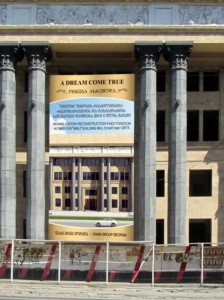 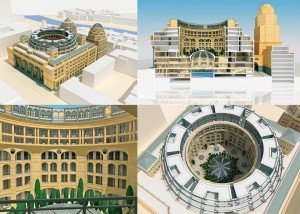 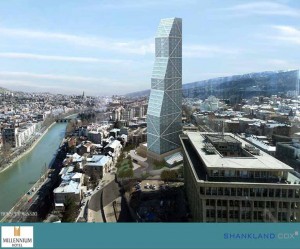 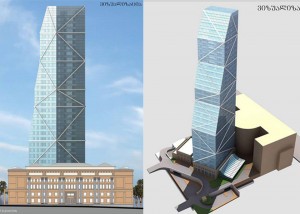 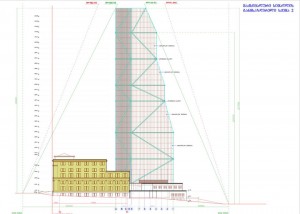 The IMEL building on Rustaveli Avenue is one of Tbilisi’s most significant pieces of Socialist Classicism. Built in 1934-1938 by the architect Alexey Shchusev (the designer of Lenin’s mausoleum in Moscow), this building sets out to embody the phrase “national in form, socialist in content“. A. Shchusev, who won the competition in 1933, created a building with a symmetrical floor plan consisting of three parts. The central reception area leads towards the semi-circular auditorium, which is then clearly distinguished from its two side wings. The facades are quite different in style; the front is classical Stalinist, while the rear carries echoes of Constructivism flanked by the two square-sided facades. Both the exterior and interior are richly decorated with wooden and metal works, as well as with various Georgian marbles and natural stones. The building’s mix of styles is truly eclectic and of the kind that should be preserved as “Gesamtkunstwerk.”

Unfortunately today the IMEL building looks set to become one of Tbilisi’s most prominent examples of the failure of monument preservation.

In Russian the abbreviation IMEL stands for “Institute of Marx, Engels, Lenin”. Later it was renamed as IMELS, the additional ‘S’ representing Stalin. After Stalin and Engels disappeared only IML remained, but it is still known as IMEL or by its Georgian version – IMELI. Subsequent changes in name correspond to its various new functions and ownerships.

After the fall of the Soviet Union it served as the Parliament Building (1992-1995) which adopted the new constitution of free Georgia (1995). Later it took on the role of Georgia’s Constitutional Court.

The history of its demise and demolition started in 1990 when the two relief-sculptures facing Rustaveli Avenue, by Georgian sculptor Jacob Nikoladze, were removed. The relief on the frieze by Tamara Abakelia still remains, but the medallions with the frieze portraits of I, M, E, and L were also removed.

Official opinion on whether to keep or abolish Soviet symbols on Georgian architecture has fluctuated. Some of the authorities are keen to remove all Communist symbolism, including Stalin’s image from every Georgian monument, while others argue that such reliefs should be kept as integral to the fabric of a unique structure.

In 2007 the IMEL building was delisted by the then Minister of Culture, G. Gabashvili. A week later it was sold to the company “Capital Invest” with the intention of building a luxury five-star Kempinsky hotel. The project was designed by the architects Rob Krier and Christoph Kohl. It contained 200 rooms, apartments, penthouses with various functions, but preserved only the front, Rustaveli facade. The investor started to demolish the building without permission and IMEL lost a number of its original elements including the Shchussev-designed decorations. However by 2008 the project floundered and the building was subsequently sold to the “Dabi Group.” The new owner declared its intention to create a new luxury tower as part of the Millennium chain of hotels. In 2011 Tbilisi City Hall gave permission for the construction of 300 metre high glass tower to stand behind the Shchusev building.

In this regard the words of Georgian architect M. Chkhikvadze might be remembered. In an essay on the IMEL building written in the mid 20th century he writes: “In the context of Tbilisi overall, architects must always consider the view of every new building from Mtatsminda mountain, as well as from the left and right banks of the Mtkvari river. The roof shape and general composition of each building should be seen as a vital component of the city as a whole.”

The current design – now being rapidly built – is completely out of scale and style with the surrounding architecture. It will dominate the skyline from every angle and demolish the 19th century ambience of Rustaveli Avenue. Not only will a historic monument of great character be irreparably damaged, so too will the atmosphere of the entire Georgian capital.

what a shame… for the city and for our profession as architects.
We, as the first designers, wanted to preserve as much as possible inside as well outside from Shchusevs genious design.

The best solution was to preserve this building as a cultural heritage and not to sell it to developers.