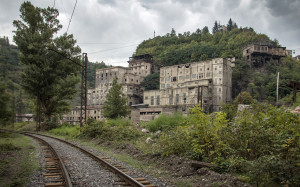 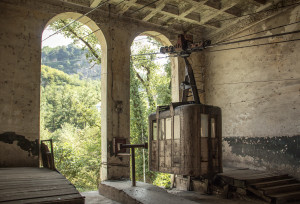 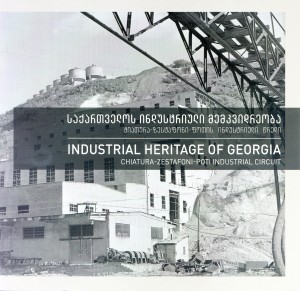 Following the initiative of the National Agency for Cultural Heritage Preservation of Georgia an interesting publication named “Chiatura-Zestaponi-Poti Industrial Circuit” was published in 2015. This can be regarded as one of the initial steps taken towards the research of industrial heritage of Georgia in general, understanding of its importance and sharing it with general public.

The authors, architectural researcher Nano Zazanashvili and architect Levan Kalandarishvili, have studied the history of how the industrial circuit was established, what played the major role in its formation and the prerequisites and stages of its development. The book presents an interesting photographic archive as well as images by architect Nikoloz Mchedlidze depicting the current situation.

The publication embraces all levels of the industrial circle:

– City Chiatura, center of the manganese deposits area, ore discovery and mining, its enrichment and transportation, unique systems of freight and passenger cableways.

-Zestaponi and the Ferromanganese factory.

-The Eurasian transportation corridor – City Poti and its harbor, from where the industrial products were exported worldwide.

Despite the fact that the study only represents an introductory stage of the complete research that has to be conducted about the Georgian industrial heritage, the authors were able to present the information in the format required to trigger interest towards this theme. The book concentrates on the mining production and history of metallurgy, but also offers insight into issues related to the industrial architectural heritage on the whole. The study ends exactly at the point, where curiosity is born – you finish reading only to realize that you are willing to learn more.

Why is it important to explore and preserve industrial architecture, grant it a new function and life?

Industrial regions and the buildings in them represent a valuable cultural and historical ensemble. Their significance has been widely recognized across European countries long ago. Unsurprisingly, many industrial buildings have been acknowledged as monuments by the UNESCO. Remarkably for example the Ruhr region was recognized as European Capital of Culture in 2010, transformation of historical industrial buildings into cultural institutions and granting a new life to them is regarded as a thing the region can be proud of.

The industrial circuit of Chiatura-Zestaponi-Poti embodies the central part of the early industrialization period of Georgia. Each level of the circle, with its functions and purposes is unique. The industrial architecture has played a crucial role in the urban development of each of these populated districts. The main charm of the architecture lies in the simplicity of its forms. Although the forms of industrial buildings are, as a rule, defined by their function, this does not hinder its diversity.

Often reaching such functional simplicity was a result of brilliant engineering decisions. Moreover, the publication suggests that administrative, transportation and workers’ residential districts were developed around the industrial buildings in these regions; the latter were characterized by exceptional architecture, which require preservation and renewal.

Notably, following the arguments presented by the authors in the research, the status of Cultural Heritage Monument was granted to the following objects:

-The cable car station Perevisa-City in Chiatura, order № 2/255 from 11 August 2016 issued by the General Director of the National Agency of Cultural Heritage Preservation of Georgia.

-The Railway building in Shorapani, order № 2/360 from 9 December 2015  issued by the General Director of the National Agency of Cultural Heritage Preservation of Georgia.

It would be worthwhile to attach the plan of each of these cities to the publication, depicting the buildings and denoting the period in which they were built and functions they carried. However, in a way, this could be considered as the following stage covered in the research that all of us await with great interest.

Who should be interested in the continuation of this research?

Apart from the National Agency of Cultural Heritage Preservation, the government as well as the society, the current owners of these industrial areas, the entities who really have the power to fund these works and publications and later contribute to the realization of rescuing and preservation of these industrial architectural monuments.

For whom could this publication be interesting?

All stakeholders involved in the working process of the active enterprises described in the book, every local citizen who is fascinated by the history of their living and working environment. Moreover, for the professional circles of historians and industry researchers as well as urban architects, photographers, anthropologists, sociologists and all other interested parties.