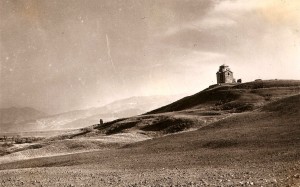 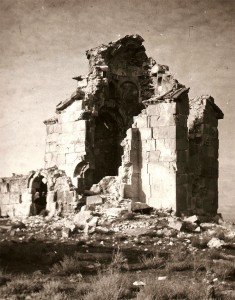 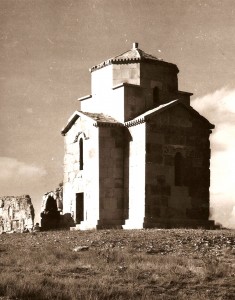 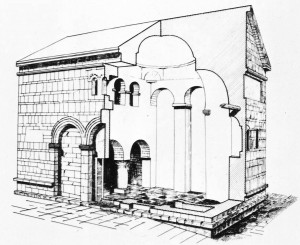 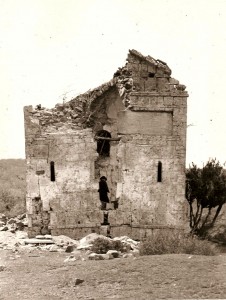 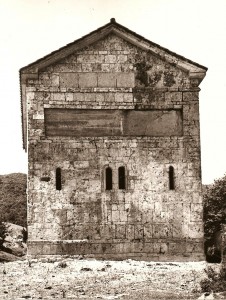 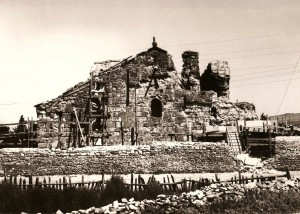 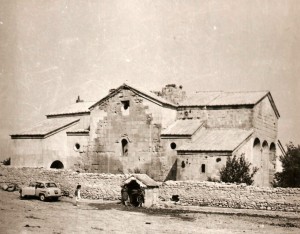 Tsromi Church in the process of restoration 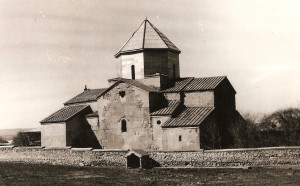 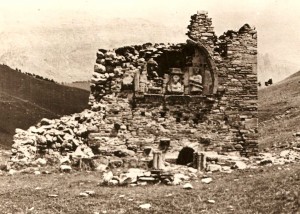 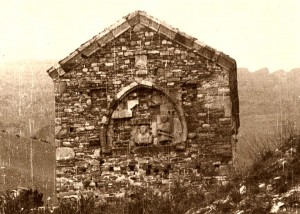 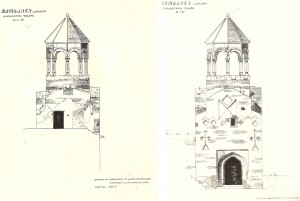 Bell tower of the Bethlemi Church in Tbilisi. Site measurement drawings by L.Khimshiashvili 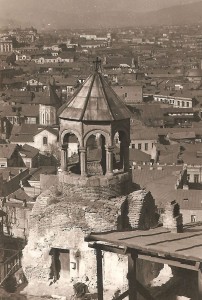 Bell tower of the Bethlemi Church in Tbilisi before restoration 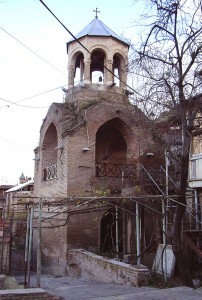 Bell tower of the Bethlemi Church in Tbilisi now 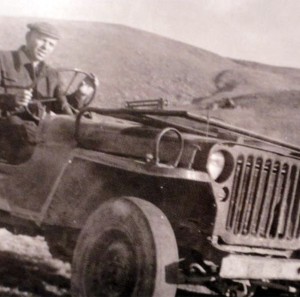 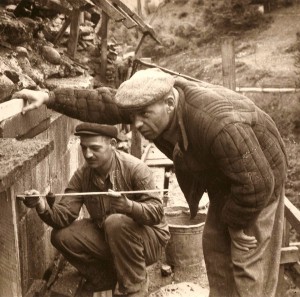 This is the first in the series of articles dedicated to the architects of all generations working in Georgia.

“Architectural monuments are destined to be attached to the ground forever – they represent a major part of the artificial environment created by men. Therefore, architectural monuments are a constituent part of one whole broad understanding of a native land. In this sense they can play the role of incentive for patriotism.” – Levan Khimshiashvili.

Architect Levan (Leo) Khimshiashvili was one of the founders of Georgian school of architectural restoration and the author of 33 restoration projects, including: Samtsevrisi, Tsromi, Tsirqoli, Skhalta, Vardzia, Bedia, Tianeti Sioni, Tkoba-Erdi, Red Bridge, etc. The projects implemented by him stand out by interesting, unconventional resolution of the most complicated engineering and construction problems. Leo Khimshiashvili was not guided by generally accepted schemes of restoration; instead, he took an individual approach to each monument considering its peculiarities. Vakhtang Tsintsadze wrote: “While drawing up a restoration project Levan Khimshiashvili finds it insufficient to just get acquainted with the monument to be restored, he carries out everyday observation in the process of restoration work in order to specify the works foreseen by the project. Moreover, he belongs to the group of restorers who we have seen in the role of a ‘surgeon’, with their sleeves rolled up, holding a tool, and standing up as a healer, in the real sense of the word, of damaged or diseased parts of the monument.”

In 1951 L. Khimshiashvili restored Samtsevrisi, an excellent architectural monument of the 7th century. It is situated on an elevated place in the heart of Kartli, at five kilometers from Kareli. Although the church is rather small in size, it can be perfectly seen from far away due to its well-selected location. It draws attention by its harmonious proportions and sophisticated volumes. Samtsevrisi was badly damaged by the earthquake in 1940. As a result of detailed study it was decided to carry out restoration works with the method of anastylosis.* It was necessary to decide on the hardest construction issues as the surviving walls of the church had different degrees of inclination and depressions. Two options were discussed in order to resolve this problem: The first implied building of the lost walls while maintaining vertical planes, which made the work simpler, but an additional 22-cm wide space, unusual to the monument, would emerge between the newly built and the original walls (size of inclination of the north-east wall towards north). The second option considered building of the lost walls with inclinations and directions existing on the surviving walls, which would allow maintaining of the parallel pattern of the masonry; furthermore, initial measures of the facades would remain unchanged, old and new masonry would fit together and spherical and cylindrical arches would be restored without additions. Despite the fact that assembling of the walls at different directions would make the work more complicated and more expensive, still the second option was adopted. After restoring in this way the monument remained wholly inclined to north-east, which is imperceptible, as there are no evident verticals nearby. The materials about the restoration of Samtsevrisi were published in the ‘Historic Preservation’, N10, in the United States of America (at present ‘Preservation’ – Magazine of the National Trust for Historic preservation, Washington D.C.)

Tsirqoli, one of the most remarkable monuments of Georgian culture, was built in the eighth century. It occupies an important place in the history of Georgian architecture due to its artistic and historic significance. The architect created a very peculiar inner space of the building, which has no parallel in monuments built either before or after it. Over centuries the monument experienced deformation caused by destruction. As a consequence of an earthquake, the south-eastern corner was broken off, a large part of the conch of the altar as well as the eastern quarter of the dome, roofs and upper parts of the walls collapsed. The church of Tsirqoli was restored in 1957 according to L. Khimshiashvili’s engineering solution, which he placed against the project presented by constructors. At first the constructors were not in favor of his version of the monument’s maintenance. Particular engineering intuition, which made Leo Khimshiashvili stand out, enabled him to try, contrast and evaluate various possible options. He always succeeded in employing his intuition in solving the most complicated tasks. “The south-eastern corner was erected at its original place without dismantling, which, in its turn, made it possible for us to strengthen the monument – to conduct conservation works by means of restoring lost parts, due to which deformation of these parts – the apse conch, dome sphere, arches of south walls, eastern and southern facades – would be prevented.” – L. Khimshiashvili comments.

Tsromi church is a monument of the classical period of the development of Georgian architecture (early seventh century). The monument has gone through a number of deformations as a result of destruction over the period of its existence. The final one was caused by a strong earthquake of 1940. The inclination of the west wall was so big that complete collapse seemed unavoidable. Investigation of the monument started in 1955 and a project of restoration was drawn. All the preparation works were executed. “On 15 August 1959 the west wall, which had been inclined from the vertical plane by 56 cm and which weighed 360 tons, started to move slowly with the help of cranes and eventually was put at its due place. By moving the wall to its place the cracks were tied up and the dimensions of linking arches were given their original image.” (L. Khimshiashvili) “In 1976-1977, alongside other conservation works, the dome was restored using plywood. The works turned out to be rather labor-consuming and demanding subtlety, moreover, it was the first case in the history of monument protection in our country.” (L. KhimshiashvilI)

Interesting works were executed with the method of anastylosis on the church of Skhalta in Adjara. The church belongs to the 13th century. It is the most prominent monument of architecture in Zemo Adjara. The church of Skhalta was destroyed by invaders, when Adjara was conquered by Turks (15th c). They destroyed dressing stones of the walls and used them for building houses. The carved stones were stolen by the residents and used as tombstones. Due to this situation prospecting works were carried out in the villages and their environs before starting restoration works and some fragments of the church were returned too. In 1955 a record was made in the Skhalta diary: “September 28. Started work at 7 am. The arranged masonry is being filled with solution. I have made a project of restoration of the third row of the north wall which was handed to stonemasons. A small window is cut in this row which lights up the western niche of the north wall. This window is circular and we have put off making its drawing, as it requires further study. We are finishing work at 7 pm. The weather is rainy.” This is one of the shortest records in L. Khimshiashvili’s diary and it is drawn here in order to show that every single step and action made by him was based on profound analysis and study.

In the spectacular Assa Valley, in mountainous Ingusheti, there is an excellent monument of Georgian architecture – Tkoba-Erdi. The surviving parts of the monument and various architectural elements found in the ruins date mainly to the 9th -12th and 15th -16th centuries. However, studies showed that there had stood a construction there before the 9th century and the present monument was built upon the original foundations. An extract from Leo Khimshiashvili’s diary of 1968: “July 21. The young men who assist us and Mehamed Aziev arrived at 9 am. The weather is good. Doing some measuring work. Examination of the monument in situ convinced us that we are going to deal with a very complex site. First of all, it must be noted that the monument has undergone serious alterations at different periods. These alterations have been carried out at such a large scale that it becomes impossible even to imagine its original architecture. In our opinion, the basic monument should belong to the 8th -9th cc. The surviving architectural fragments and some construction elements are testament to it. For example, the eastern window is resolved in the same way as at Tsirkoli.” Resulting from the peculiarities of the monument, the restoration project provided for restoring employing the archaeological method, i. e. protecting the monument in the form it reached the mentioned time. Tkoba-Erdi was restored in 1968-1971.

The bell-tower of Bethlehem (Petkhain) church in Tbilisi was studied and restored in 1956. “After examining it turned out that the works to be executed at the site are rather complex in nature and, what’s more, fully depend on research in situ. During its short period of existence the monument has changed its image several times due to repeated alterations and, therefore, the approach of restoration should be strict and every part to be restored should be supported with evidences.” The study of Petkhain bell-tower was conducted simultaneously with strengthening works of separate parts.

Levan Khimshiashvili, Honored Artist, architect-restorer and researcher, was born in Tbilisi on 23 November, 1920. After graduating the Faculty of Architecture at the Tbilisi Communal Technical College with distinction, Levan Khimshiashvili was called up to the Second World War front. After demobilization in 1945-1951 he studied at the Faculty of Architecture of the Tbilisi State Academy of Art. Starting from student years L. Khimshiashvili got involved in expeditions held by the Institute of Georgian Art History and did measuring works of architectural monuments. It was then that, due to his talent and diligence, he drew attention of a famous architect N. Severov. With graduating the Academy he started restoration of monuments. In 1951 he became the Senior Architect at the Special Scientific-Restoration Studio and went on to become the Director of the Studio. He occupied this position until 1967. Simultaneously with his practical and research-analytical activities in the system of the Ministry of Culture, Leo Khimshiashvili did teaching at the Tbilisi State Academy of Art. From 1969 to his death in 1981 Levan Khimshiashvili was the Dean of the Faculty of Architecture at the Tbilisi State Academy of Art. In 1969 he founded the academic Department of Restoration which he headed himself. He read the course of theoretic disciplines and was the leader of restoration projects. It is particularly noteworthy, that a number of diploma works done by Leo Khimshiashvili’s students were recommended for implementation by the scientific-methodological board of the Ministry of Culture (Bochorma, Khujabi, Khertvisi, etc.).

*anastylosis (Greek, re-erect), a method of restoration providing for restoring a historical monument using its own surviving original parts. Criteria for anastylosis have been established by the Chart of Venice. It is necessary to estimate the exact location of fallen parts and their careful study. It is impermissible to use them hypothetically during reconstruction works. The first use of anastylosis is recorded at the Acropolis in Athens in the 19th century. Today they are considering restoring Bamiyan Buddha statues in Afghanistan employing the method of anastylosis as, according to archaeologists, it is possible to reuse at least 50% of their ruins.