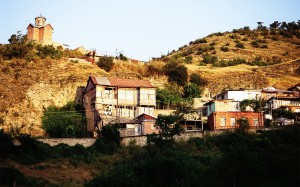 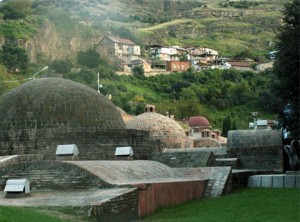 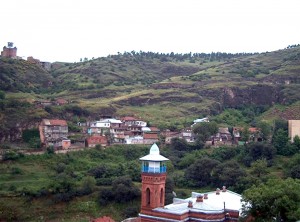 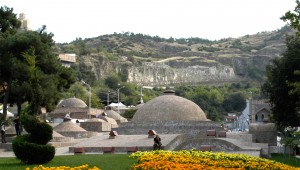 Mirza Shafi street, located in Seidabadi, Tbilisi’s Abanotubani district, used to sit at the foot of Tabori mountain. This, one of the city’s oldest streets (possibly the oldest) used to faithfully follow the curve of the cliff and was special for so many reasons. Its most recent houses (Tbilisi has been burnt to the ground over six times) were mostly built between the end of 19th and beginning of 20th centuries and laid out in a terraced, layered form, indicating old Tbilisi houses with flat roofs (bani). The different street-levels were inter-connected by stairs and the houses built only on the upper, cliff-side of the roadway to maintain their wonderful views over the old town.

The street contained two listed cultural monuments, house number 16 (registered as monument No 1022), and house number 8 (registered as monument No 1023). It would have been more correct to have listed the entire street – due to its important historic location, beautiful expanding views and function as home to a key part of Tbilisi’s Muslim population. Such designation would have helped in its protection as well as restoration to international standards. Furthermore the area’s native population would have remained in situ as an essential ingredient to the character of Tbilisi’s old town.

However in 2009 the residents of Mirza Shafi street were forcibly evicted from their homes and all the houses under the cliff raised to the ground. After this the hillside itself was then gouged out to make space for a proposed multi street and kitsch housing development – as yet unstarted.

With this action the city of Tbilisi lost forever a vitally important urban complex, two monuments and a section of Tbilisi’s diverse ethnic community. The people who lived there for many centuries had kept there also their sacred symbol, a stone, which was called “surdos qva”.