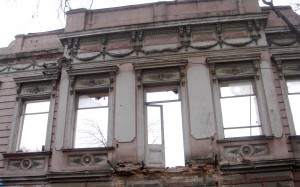 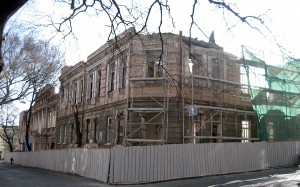 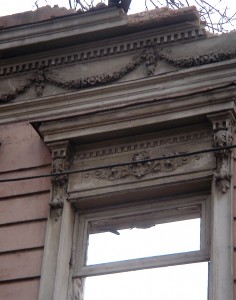 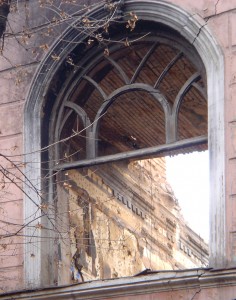 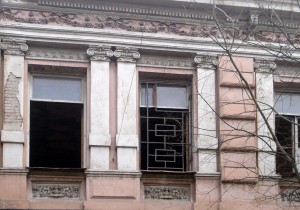 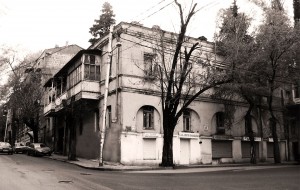 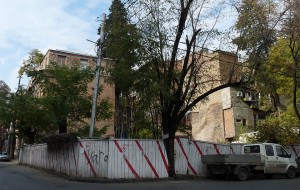 Dadiani Street, which runs parallel to Kala Galavani’s north wall, marks the border between Tbilisi’s late medieval Old Town and its subsequent 19th century development – easily identifiable by the more modern rectangular street grid. Many describe the former layout as ‘Asian’ and the latter ‘European.’ The streets running parallel to Dadiani run up to the mountainside (Assatiani street) and combine with three other perpendicular streets to create the bulk of Sololaki – the old grid still survives today.

Built according to a district plan, Sololaki’s residential brick facades face the street in an eclectic mix of architectural styles as was common in Europe and Russia at the time. However the back side of the houses are uniquely Caucasian with rooms built behind deep-set balconies designed to overlook the essential courtyard. Sololaki is special because none of the facades nor courtyard shapes repeat themselves.

Between 2006 and 2008 several building complexes bordering Lermontov, Dadiani and Tabidze streets were totally demolished, including the inner courtyards – in clear violation of the urban plan and listing codes. These include: Lermontov 8, the corner building of Lermontov and Dadiani 8/11 and Dadiani 11 along with their connecting courtyards and passages.

Much of these areas are now just open space, and it is important that any new development should restore the former character of the courtyards and buildings while not exceeding their original height.