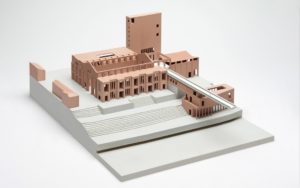 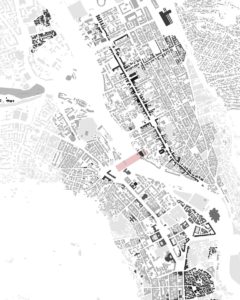 The project site sits directly opposite Rose Revolution square in the heart of the city, bridging a gentle curve in the Kura river. Site plan showing the site within Tbilisi © Benjamin Wells 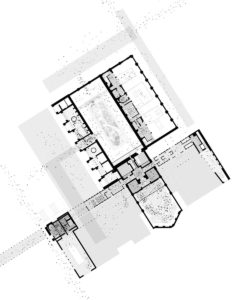 Both the programme and corresponding architectural proposal can be understood as a composition of parts, informed by Tbilisi’s existing urban identities and typologies as well as the ideals of the various groups it represents. As an ensemble of distinct parts, the project becomes a basis for the formation of the city at large by representing some of the variation central to both the city and its citizens. Gradients of political intensity © Benjamin Wells 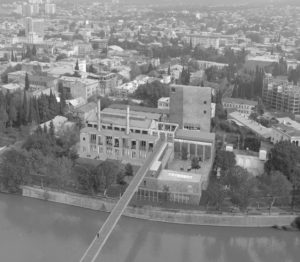 The proposed pedestrian bridge is directed into the centre of the building, dispersing visitors to a spectrum of public functions. View from Rose Revolution Square © Benjamin Wells 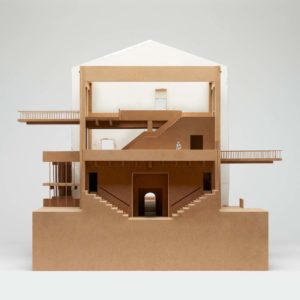 The project is as much a piece of urban infrastructure as it is a working organisation, and the project centres around the thresholds between these polarities. They converge spatially within a central circulation core, where multiple public and organisational routes intersect. Physical model, 1:50 © Benjamin Wells 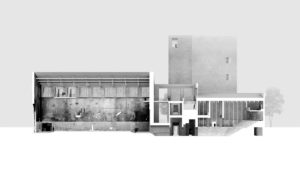 Whilst the central hall is maintained as a monumental and contained void, the adjacent forum becomes dense with architectural intervention, focusing political intensity through its form. Section through the Great Hall and Forum © Benjamin Wells 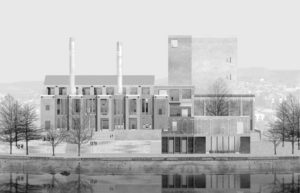 The project resembles a symbolic reclamation of the river front, creating a public park in place of the existing road (which is to be redirected as part of the new Tbilisi masterplan) River Elevation © Benjamin Wells 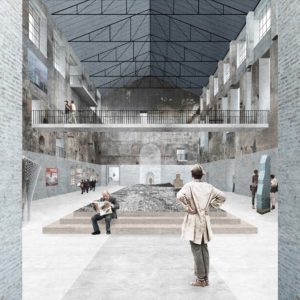 The introversion of the central hall is maintained, yet it is transformed into a major public promenade which circulates around a scale model of the city - the project’s political concern. Various civic functions are introduced into the surrounding ruin, creating a gradient between the open city and the particular of the organisation’s urban processes. View of the Great Hall © Benjamin Wells 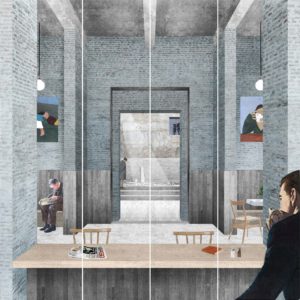 View from the cafe into the Great Hall © Benjamin Wells 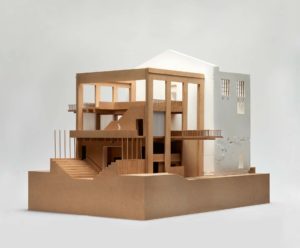 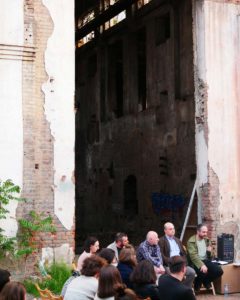 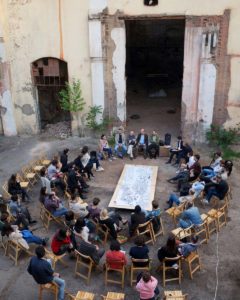 NT: Benjamin, you came to Tbilisi in 2016 with a group of students of Danish Royal Academy of Fine Arts, School of Architecture. Why did you come to Tbilisi?

BW: We came to Tbilisi because it is a city with a very particular set of economic, social and political issues which are closely linked to and reflected in its built environment. The plasticity of its urban condition perhaps makes it vulnerable, but also holds great potential – it is this potential that we came to Tbilisi to explore

NT: Please tell us about the event Another architecture

Another Architecture was a three day exhibition and symposium held at ArtArea Gallery in May 2017. The exhibition presented explorative and evolving architectural propositions for Tbilisi, aiming to provoke discussion with relevant stakeholders and interested visitors. An open-air panel discussion explored various themes relating to Tbilisi and its urban condition, and aimed to explore the conditions for a civic architecture, question the transience of the architectural project and challenge the agency of the architect

NT: Are you the only one who finally have chosen Tbilisi with it’s problems as the topic of the Master thesis or there are more projects by your friends from Denmark?

All the students from Political Architecture in 2016-17 focused on Tbilisi during their studies, and a publication documenting all of the resulting projects, along with essays and reflections, can be bought online. https://politicalarchitecture.tumblr.com/

NT: Please tell us about your project

BW: Tbilisi City Forum is an attempt to redesign processes of urbanism in Tbilisi, through proposing an architecture which facilitates city making as a collective, democratic endeavour. Its focus is a disused power station in the centre of the city, which is transformed into an active organisation where the evolving project of the city can be revealed, defined, challenged and reimagined. It is an ambitious and speculative project, but aims to be grounded in the reality and physicality of the city.

The proposed organisation aims to bring together a multiplicity of voices into a place of negotiation, with knowledge, research, discussion, debate and presentation emerging as the primary foundations of the organisation. The centre facilitates the curation of ideas and knowledge for the city through workspaces for small scale urban actors, supported by a city archive and various civic functions. A range of discursive spaces allow these issues to be negotiated, debated and then acted upon, and several exhibition and gallery spaces present this to a wider public. By connecting a diverse network of stakeholders, the project aims to democratise the act of city making, and in doing so impact decisions in the interest of both the city and its citizens.

The project lies in the very centre of Tbilisi, regenerating a disused power station and bridging a gentle curve in the Kura river. The organisation is framed and directed by architecture, and can be understood as a composition of parts, the ensemble of which becomes a figure of the city at large by representing some its intrinsic conflict and variation. A new pedestrian bridge connects the contentious Rose Revolution square directly with the disused power station, transforming its main hall into a public promenade which circulates a scale model of the city. The project also marks a symbolic reclamation of the river front, and this gradient of public spaces defines the project as a piece of urban infrastructure as much as a working organisation. A complex architectural composition embedded within a holistic urban strategy aims to unite the building with its object of concern; the city.

Tbilisi City Forum explores the extent to which the building can become truly civic – representative of, accessible to and acting for a public. It does so by reviving a ruin through a reinterpretation of civic architecture, by curating agonistic political processes and through reimagining the project of the city.

NT: Tbilisi City Forum is very familiar idea for me, that’s why i am very interested in your project. As i have tried to establish the Tbilisi Forum for Architecture in 2011, i had similar ideas about the place for exchange, meetings and battles to save my vanishing city but for my imagination it was more virtual place and i have never had an idea to connect it to the concrete architecture.

In your abstract you are writing – “The re-politicising of urbanism is dependent on the provision of an arena where differences can be confronted and channelled into productive outcomes – and here lies the project of architecture”.

The fact is, that for last two decades the urban politic of the city has been driven by developers who had no other goal as more and more profit.  I think,  it was highly politicised process, because even having no regulations or bad policy is a political decision, don’t you think?

How could one place, an arena, placed in any architectural environment will help to change current conditions?

BW: I agree completely that having no regulations is a political (and economic) decision, but the question is who is granted access to that decision making process. The project rests on the premise that a democratic form of urban governance would be open to each and every citizen, allowing every voice to be heard and opinion to be considered. Whilst this may be idealistic, it seems that the systems of governance in Tbilisi are particularly fragmented, with the few active urban stakeholders operating largely in isolation, with City Hall disconnected from active citizens or activist groups, as well as developers. If a physical space aimed to document, research, represent and mediate these different groups, it would allow their differences to be confronted and perhaps directed into productive outcomes. From this would grow a knowledge base, a benchmark of city wide development and public opinion, which would in turn become an invaluable asset for future city plans. Perhaps broadening the role of City Hall to become more transparent and politicised (including a wider portion of society) would make their work less centralised, more efficient and more sustainable, giving citizens the agency to affect the development of their city and stand up against the city’s uncontrolled urbanisation.

NT: For your project you have chosen one of the most sophisticated industrial heritage site of Tbilisi. How did you deal with it ?

BW: The disused power station opposite Rose Revolution square was an irresistible site for architectural inquiry, as central as it is and impressive in its scale and monumentality. The project does not take a particular stance on preservation, reconstruction or development, but rather proposes a spectrum of intervention. The main hall is maintained as a monumental void, with subtle interventions allowing it to become a public promenade without distracting from its architectural potency. Other parts of the building are treated with less sensitivity, maintaining elements of structure and form but inserting bold new interventions. Elsewhere the project proposes completely new structures, playing with the meeting and division of old and new and creating a complex and layered architectural proposal. This spectrum of intervention allows the project to feel embedded within its existing urban condition, yet symbolic of a bold new approach to city making.

NT: Now you have finished your study, i see your project is very successful, what are your goals for the nearest future? Will you ever get back to Tbilisi? Do you have friends there?

BW: Several of my colleagues and I have been working on the Political Architecture Tbilisi publication, which aims to continue this dialogue regarding Tbilisi and its urban condition. We are continuing collaboration with many of our friends in Tbilisi, with the hope of presenting and discussing our projects with a larger audience in the city, to receive critique and develop new ideas. Hopefully a continued collaboration across cultures can bring benefit to both Tbilisi, Denmark and elsewhere.

NT: I want to believe that your project will become reality one day. I would like to wish you, your project and Tbilisi good luck! Thank you for this interview

BW: I do hope so to, and would like to thank you for your interest, your comments and for sharing the project